The Coalition deficit cuts will increase the deficit

On March 26th half a million people marched in London against the savage £81 billion worth of cuts introduced by George Osborne in the 'emergency' budget last year. More recently an impressive (sic!) estimated 350 people attended a 'Rally against debt' on the 14th of May. Not hard to see where the British peoples' sympathies lie then - and the vast majority have got it right because the Coalition government's cuts are not only going to cause great social harm but they are more likely to increase the deficit than reduce it.
How can that be right? How can cuts in expenditure increase a deficit? Well, you only have to look at Greece and Ireland to see how. Both countries are in deeper debt now than they were when they began their austerity programmes. If you slash spending you increase unemployment which increases costs and reduces your income in the form of taxes. The best way to pay off debt is to earn more. Governments earn more if they increase taxes and if the economy grows. As the economy grows government income, in the form of taxes, increases. But the cuts here have lead to a stagnant economy with no growth. There is further bad news to come in the form of increasing unemployment as the cuts bite further. Government borrowing last month was the highest ever recorded for April because tax receipts fell. Osborne has clearly shown his economic illiteracy in the last budget, which did nothing to address the problems caused by these savage, unnecessary, ideological cuts. What our economy needs is a stimulus with investment in jobs through a Green New Deal, not savage cuts.
The same failed course of action is leading to an even greater crisis in the Eurozone where Greece is unable to repay its debt and will have to default at some stage. The effects of this could be even greater than the collapse of Lehmans in 2008. In addition, Ireland, Portugal and Spain are all in trouble. The truth is that none of the bailouts of the Eurozone countries were made to help the people of those countries. They were made to bail out the bondholders and the banks - the money lenders . As with the bailout in the USA and UK, taxpayers are being asked to bear the pain and bail out the market. It is clear where the real power lies, and that's not in your democratically elected government, which exists to serve the market, whatever the cost to you and your family. And if your economy is ruined in the process its just tough luck.
Posted by @HT4ecosocialism at 13:39 No comments: Links to this post

The Tories will destroy the NHS

The Tories are now able to do something they have been dreaming about for years - the destruction of the NHS. Make no mistake about it - that is what privatisation of the NHS means. What makes the NHS unique is that it is a public service, publicly provided, and something we all pay collectively for. It's a great idea and it means that millions of people have access to decent healthcare who otherwise wouldn't be able to afford it. The NHS is not perfect but, despite what the 'free' market fundamentalists would have you believe, it is still the envy of the world. Who wouldn't want a health service free at the point of delivery?

So, the NHS isn't perfect but what could be any better? Many of the problems of the NHS are because of  to the chronic underfunding it received under 18 years of successive right-wing Tory governments. Governments who believe that what you get should be based on your ability to pay, and that everything should be subsumed to the market its easy to run down public services so that they become unpopular with voters. That is what happened to health, education and the railways in those Tory years. Despite this neglect the NHS still remained popular.

What the marketeers want is a private take-over of the NHS. The NHS brand will remain as a fig leaf behind which the profiteers will be lurking. So what is wrong with privatising the NHS and introducing competition as the Coalition government proposes? The answers are well known. Private corporations will cherry pick the most 'profitable' parts of the NHS, leaving the difficult and expensive stuff to the public sector. The NHS will, in effect, be broken up. Costs will rise and quality will fall. The private sector has extra costs not borne by the public sector: marketing, administration, and of course profits. Healthcare in the UK costs half of what it does in the USA because of this. The NHS will become unaffordable leading to call for people to take out insurance on top of the taxes they already pay. We will end up paying more for less.

Anyone who doubts this should watch Michael Moore's excellent documentary Sicko which shows how individuals and families are bankrupted by healthcare costs, how many people suffer because they can't afford drugs or routine operations, and how the insurance companies avoid paying up. We must defend what is the most important of public services. Get involved and join the fightback against this shameful proposal which will destroy our most important institution.
Posted by @HT4ecosocialism at 17:30 No comments: Links to this post

The David Laws decision is a disgrace

The old saying goes - 'its not what you are, its who you know'. This appears to apply to David Laws the MP, multimillionaire and chum of David Cameron and Nick Clegg. Laws, who was the rising star of the new Coalition government a year ago, admitted fiddling his MPs expenses, and according to a Guardian report:
"A year-long inquiry ruled that Laws "seriously and extensively" broke the rules to claim rent which was paid to his partner over a period of seven years. He has already paid back nearly £60,000 and was forced to apologise to the Commons."
But Laws punishment for his 'crime' was seven days suspension from the house of commons. Contrast this with the 12 month prison sentence handed down to ex-Labour MP Eric Illsley for fiddling his MPs expenses. Illsley, who was released from prison recently, expressed surprise that he had suffered this punishment whilst others, including Laws, had escaped. He's not the only one. Many of us are wondering why MPs, including Gordon Brown and David Cameron, were simply allowed to repay the expenses that they shouldn't have claimed. What would have happened to you or I if we were found fiddling our expenses at work? At the very least we would have been sacked, if not prosecuted.
Could it be that MPs had to find a few scapegoats to assuage public anger at the expenses scandal whilst protecting important figures like Laws and Cameron? Of course wrongfully claiming expenses was not the greatest of Laws' crimes - it was as a wealthy man he was prepared when a treasury minister to introduce savage cuts which have affected the poorest and most disadvantaged people in this country knowing that he personally wouldn't be affected. That is something he shares with George Osborne and David Cameron.
Posted by @HT4ecosocialism at 17:09 No comments: Links to this post

Locally we had a good series of results in the four wards in which we stood, coming second in Gowy from nowhere. We still have a lot of work to do and we need to build up a stronger local campaigning party.
In the wider North West, Hilary Robinson was elected to Alsager Town Council; our first Green Councillor in Cheshire, and John Coyne retained his seat in Liverpool which had seemed vulnerable to a resurgent Labour. In Lancaster we had a disappointing result losing 4 councillors to Labour who had a good result in the north of England - totally underserved given the cuts they had planned in public services and the privatisation of the NHS which they had already started upon before the general election last year.

Nationally, we went into our election campaign with 116 councillors on 42 councils and have come out of it with 130 on 43 councils, a gain of 14 seats.

Norwich fought off Labour in two wards, as well as gaining an additional seat in Thorpe Hamlet, to bring their total seats on the council to 15 - adding to its tally of city councillors at every election since 2002. We also gained seats in Bolsover, Bristol, Herefordshire, Kings Lynn and West Norfolk, Malvern Hills, Mid Suffolk, Reigate, Solihull, South Hams, Stafford and St Albans! The outstanding Brighton results were also a real highlight: we gained 10 more seats, taking our total to 23 and making the Greens the largest party on the council.
Posted by @HT4ecosocialism at 19:18 No comments: Links to this post 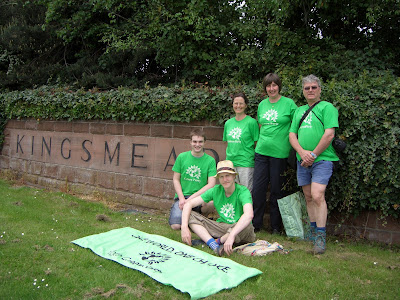 Members of the Green Party in Cheshire West and Chester have been working hard in our target wards of Gowy and Davenham and Moulton. We have been busy talking to voters and delivering election flyers over the past week and the weather has been very kind to us. By the 5th of May we will have delivered over 7500 flyers in the two wards.
Our campaign is focussed on fighting the cuts imposed in Cheshire by the Coalition government. George Osborne's £81 Billion cuts package is totally unjustified and genuine threat to the welfare state which will cause suffering to the weakest members of our society, including the poor, disabled and unemployed.
We have seen the effect that cuts have had in Ireland where the economy has been devastated. You can't cut your way out of a recession - that is what happened in the 1930s and it lead to a decade of economic stagnation and conflict which cost millions of lives.
The Green Party has a fully costed economic programme which will protect public services and create jobs, lifting us out of economic stagnation and building a future for a sustainable economy which will help us deal with the consequences of climate change. A couple of Green councillors in West Cheshire would make all the difference - wherever you are vote Green on 5th May!
Posted by @HT4ecosocialism at 19:01 1 comment: Links to this post