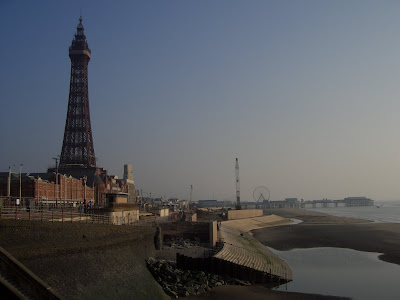 The spring GP conference was held in Black pool last weekend. I went down for the Friday and Saturday sessions. It was odd being back in Blackpool after such a long time, The place isn't at its best in March but it is certainly suffering at the moment with many shops closed and boarded up. No doubt some will re-open when the season starts but the whole place looks badly run down.

The conference was held in the Winter Gardens, which have seen better days, but also have a faded grandeur. On the Friday we had a speech by party Leader Caroline Lucas which can be seen here. Caroline attacked the government for failing to take steps to implement a Green New Deal which will provide much needed employment and investment in infrastructure to help combat climate change. 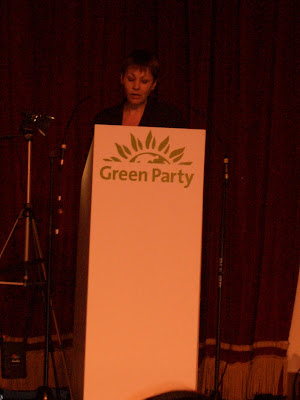 A number of motions were passed including:

C01 - Alternative Economic Strategy - which commits the party to campaign for an emergency programme of economic and social reconstruction, based on the proposals of the Green New Deal pamphlet, but broadened and reinforced to transform fundamentally the current financial and industrial system.

C02 - Migration - which noting that migration is going to be an important issue in the forthcoming European elections, and the need for a progressive and humane policy, the migration policy of the European Green Party was adopted as our own.

I attended a workshop given by the Green Economics Institute. Miriam Kennet gave us an interesting talk which revealed she has has recently been invited to give talks to various government departments on green economics including GCHQ! I'm not holding my breath waiting for the spooks to go green!

On the Saturday I attended two workshops on Transition Towns and Climate Ge0-engineering. The first included a discussion about the situation in Totnes and we talked about our ongoing frustration with green activists who don't want to get their hands dirty by getting involved in real politics. The Climate Ge0-engineering workshop focused on Biochar - that's charcoal to you and me. It seems there are plans to plant millions of hectares of monoculture forest around the globe, then chop them down and pyrolise the biomass to produce fuel and bury the resulting biochar in the soil. There is a very good article by George Monbiot in today's Guardian which exposes this potty idea. Biochar has the potential to do enormous damage so lets hope the article helps to sink it.
Posted by @HT4ecosocialism at 19:17